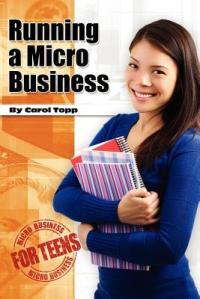 Taking another slight detour from the type of books I normally review here. Maybe this month’s theme should be “books that don’t fit the mold.” 🙂 I know that a lot of my readers have entrepreneurial minds. From book formatting to web design to Etsy shops, you find creative ways to make money. And maybe some of you who don’t currently run your own “Micro Business” would like to, you just don’t know how.

I would recommend this books (and it’s companion books) to any young person running or interested in running their own business. Here’s the review I wrote on Goodreads.

I picked this book up at a local homeschool conference. Because I have a bachelor’s degree in business, I figured most of it would be review but thought it might be a useful reference to have handy. I was right. It’s like having notes from my college classes in a simpler, more practically applicable form. Some of the information was a little over simplified for me, but for a teen or young adult just learning about business, it would be perfect. About half of this book focuses around proper record keeping, which is always dry, but at least in this book it’s understandable and concise. Anyone should be able to read through this book quickly and come away with a better understanding of how to run a micro-business.

and Money and Taxes in a Micro Business

a lot as I work to publish Counted Worthy! As an added bonus, author Carol Topp has answered a couple questions I tweeted about her about taxes. Yay for friendly authors! 🙂

While we’re on the topic of businesses, how many of you are running entrepreneurial ventures? Share links to your websites, Etsy stores, etc. in the comments!

I thought it might be fun to try doing some surveys about books, starting with one about our monthly theme. Let me know what you think of this new idea/feature. I look forward to seeing the survey results!

Over the years I have enjoyed all four of Lea Wait’s historical novels for young people. Last Friday I reviewed Finest Kind here on my blog. Today it is my privileged to introduce Lea for this interview.

What parts of Finest Kind are factual?
The background of FINEST KIND is accurate: because of the Panic of 1837, banks failed in Boston and other cities, there was widespread unemployment, and many families were in dire circumstances, as Jake’s family was. The acceptance (or, rather, lack of acceptance) of those born with physical or mental disabilities is accurate for that period. A little later in the nineteenth century there were institutions where families sent those with mental disabilities, but in 1837 such individuals were kept at home and hidden, or, as in Simon’s case, found a place within the community.

Wiscasset was, and is, a real town, and many of the people in FINEST KIND did live and work there. Dr. Theobold (who also appeared in my book WINTERING WELL) was the town doctor, and Thursey Seigars was his housekeeper. The minister, the shopkeepers, and other local people are real characters. Most notably, everyone who worked at (or who was incarcerated in) the Wiscasset Jail was a real person, including Samuel Holbrook, the jailer who also was a school master, and his wife Lucy and their children. The jail and jailer’s home did burn down December 3, 1838, and Lucy Holbrook, her children, and the inmates of the jail, were all saved by students who saw the flames on their way to school that morning.

The other characters in the book are fictional, although there were people like them in 1838 Wiscasset.

Out of all your historical books for young people, who is your favorite character? Why?
Who is my favorite fictional character? That’s an impossible question! It’s like asking me which of my children I like the best! I did love writing Granny McPherson, in FINEST KIND.

In general, I love my characters who are survivors; who find out their decisions can control their lives even in the worst circumstances.

They would include Abbie, in STOPPING TO HOME, who comes up with an ingenious solution to keeping what is left of her family together. Michael/Noah (he even changes his name to survive) in SEAWARD BORN, who gives up all he knows and loves for a chance at freedom. Will, in WINTERING WELL, who refuses to believe his life is over when he loses a leg in an accident. And Jake and Nabbie in FINEST KIND, both of whom are proud and stubborn and refuse to give up even when it seems impossible for them to take care of their families.

The jail that is there now is the one built in 1839 to replace the one that burned in 1838. I first visited it when I was about ten years old and can still remember how cold and still those old cells were. How horrible it must have been to have been imprisoned there.

Now I sometimes give tours of the jail myself, and love pointing out the bars that one prisoner tried to saw through, and the drawings of a schooner another prisoner made on a whitewashed cell wall. The cells are dark and cold. Granite doesn’t burn, so the walls are the same ones Jake would have seen, and the worn stone floors are the same ones Sam Holbrooke and his wife Lucy walked on. I like feeling that through FINEST KIND many people who’ve never been able to visit a jail like this one in person have been able, through Jake, to find out a little about what it was like to live through hard times in the 1830s.

Is there anything else you would like to share with readers?
We have some of the same problems today that people had then. Families still have secrets. People are still born with disabilities. We still have bullies. People still make fun of other people they don’t understand. There are still parents who can’t find jobs and parents who drink too much.

Writing about problems doesn’t solve them. But sometimes it’s easier to see problems from a distance. That’s what I hope my books will do: open windows to the past, and show how real people, with real lives, and real problems, lived then. They survived their problems, and we will survive ours.

Someday, when my younger readers now are grown, maybe one of them will write an historical novel set in 2012, and one of their young readers will wonder how people ever coped in the old days.

Thank you so much for your thoughtful answers, Lea!

Last Friday I posted a book review for A Dog’s Way Home. This book is the story of a Sheltie’s journey back to his beloved girl. Today, author Bobbie Pyron is here to answer a few questions.

What gave you the inspiration for A Dog’s Way Home?
I like to say A Dog’s Way Home is my personal love letter to my dogs and to all the classic dog books I read growing up, like Lassie Come-Home and The Incredible Journey. It’s a celebration of the two things I have always loved most in the world since I was a child: books and dogs. It was inspired specifically by two of my dogs, my Shetland Sheepdog, Teddy, and my coyote mix, Boo. I started thinking about the story one day when I was hiking with the two of them way up in the mountains. I watched how differently they interacted with their environment and with me-—Boo always off-trail where I can’t see her, hunting, and Teddy never farther than six feet from me. I asked myself, “What if they had to survive on their own in the wilderness?” I knew Boo would be okay, at least physically. But Teddy was another story. So A Dog’s Way Home is his story!

Tell us a little bit about Shelties. What are some of their characteristics? What makes them unique?
Shelties were originally bred as herding dogs on the wild and cold Shetland Islands off the northern end of Scotland. They herded sheep mostly, and they also served as sentry dogs, alerting the crofters when a stranger came on their land. They’re a tough little breed. They are also extremely loyal and very smart. They bond strongly to their people but can be aloof with strangers. They also, generally speaking, are great family dogs. They’re not for everybody, though: they shed a lot and they bark a lot!

I can certainly relate to the shedding and barking! My Sheltie, Lady, seems to have missed the part about being aloof with strangers, though. 🙂

How long did “A Dog’s Way Home” take you to write?
It took about nine months to write the first draft. I tend to edit as I go along. Plus, I still work a day job (I’m a librarian in my “other life”). That first draft was followed by quite a number of revisions and rejections. From first draft to publication in March of 2011, it took about three years. Being an author is not for the faint of heart, nor for the impatient.

Tell us about your next book, “The Dogs of Winter”.
The Dogs of Winter is based on the true story of Ivan Mishukov, a very young homeless child in Russia. The book takes place in Moscow in the mid-1990s, after the fall of the Soviet Union. Although we tend to think of the Soviet Union’s fall as a good thing, it was devastating to the people of Russia. As a result, there were tens of thousands of homeless children and teens living and doing their best to survive on the streets of Moscow and St. Petersburg. Unlike most of the homeless kids, Ivan did not join one of the many gangs of children living in the underground railway stations. Instead, he was adopted by a pack of feral street dogs and lived with them for two years. My book is a fictionalized account of those two years. My editor, Arthur A. Levine, says it’s a mash-up of Oliver Twist and Julie of the Wolves. But it’s also an exploration of what makes us human and what defines “family.” It’ll be published by Scholastic October 1st.

Thank you for your time, Bobbie!