A few weeks ago, a new friend asked me a question, and I started my answer with something along the lines of, “Well, you know how we’re patriotic about our country?” As the first generation of her family to be born in the USA, her quick answer was, “No, not really. Mostly I hear people talking about how much they hate different things.” 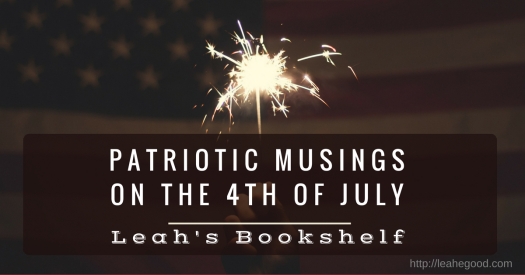 Americans’ conversation about their country has become almost entirely political. We talk about the politicians we dislike, the laws we think should or shouldn’t exist, and the concerns we have for the direction our country is headed. Though they worry about opposite sides of the coin, liberals and conservatives alike are afraid of the direction they see the country headed. That fear drives our perspective on our country and what is happening in it, and the resulting emotional reactions dominate the opinions we express.

I’m not here to say we shouldn’t talk politics, that the laws being passed aren’t important, or that we shouldn’t take an active interest in the people governing our country. However, on this Fourth of July, can we take a step back from politics and just be Americans?

I grew up saluting every uniformed person I saw—police, firefighters, and military—and would feel a surge of delight when it won a smile or reciprocated salute. I loved the flag and that it represented my country. I carried my portable cassette player around singing along to Wee Sing America songs like You’re a Grand Old Flag and We Love the USA and America the Beautiful. My brother and I spent hours of “pretend time” reenacting our own versions of Guns for General Washington, Ethan Allen and the Green Mountain Boys and Johnny Tremain among many others. It was an idealistic perspective, but I wish more children of this generation had the opportunity to grow up loving their country. 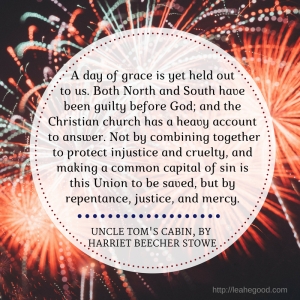 Our history as a nation isn’t perfect. I’m not naïve enough to argue it is. But neither do I think you must ignore the flaws to love the country. Did the first European settlers always  treat the indigenous peoples with respect? No. Is our history of slavery and racial discrimination an ugly scar in our heritage? Absolutely. Do these errors mean we should hate our country? No!

One-hundred and thirteen years ago, my great-great grandfather got off a ship from Italy, came through Ellis Island, and started working to pay his family’s way to join him. A few years later, my great-great grandmother was turned away and sent back to Italy along with her children—not because she had done something wrong, but because she had an infected spider bite on her face and they didn’t know what it was. What she couldn’t have known was that she entered Ellis Island during its busiest week. The quarantine area she likely would have been held in at any other time was probably too full. It took two more years before her husband could once again save enough to bring her back to America—this time successfully. My great-grandmother, who only passed away a few years ago, was the first of her family to be born on American soil. If you referred to her as Italian she’d counter, “No! I’m 100% American yank.”

I share this sliver of my family’s story to illustrate the point that our history, though not perfect, is rich. It is neither wholly good nor wholly bad. We have been the oppressors, yes. We have also been the rescuers. We have done harm and good, made mistakes and helped the world.

My history—both personal and national—tells me that national security is important but also demonstrates that immigration is a beautiful and integral part of our country. They’re not mutually exclusive. It tells the importance of religious freedom for all, but also demonstrates the value of Biblical truths used to guide a nation. It tells me that there have always been disagreements and divisions in my country, but we’re always stronger when we come together instead of pulling apart. History tells me that we will always make mistakes and the faster we recognize them, the sooner they can be resolved. Solutions aren’t easy. We will always disagree. There will always be struggle, in our country and every other country, because countries are made of people and people aren’t perfect. Despite our flaws, we can value our country, value the people that form our nation, and value unity enough to fight for it. 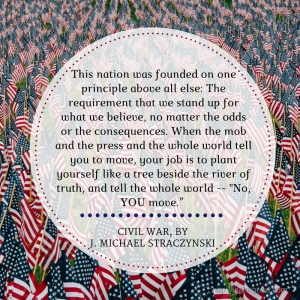 Friends, will you join me today in being an American? Put aside the fear of what the future might bring to appreciate the freedom the present offers. For one day, simply pray for God’s guidance and blessing on our leaders instead of debating whether or not they deserve their office. As you watch fireworks, reflect on the sacrifice of so many people throughout our country’s history who gave their lives so that our star-spangled banner might still wave over the land of the free and the home of the brave.

In the words of the song I used to belt out in unison with my Wee Sing cassette, “We love the USA! We live in a land where men are free and proud to declare their liberty, we mean it when we say, We’re glad we’re alive and live in the USA.”

What do you appreciate about the country you live in? How are you celebrating Independence Day?

7 Replies to “Patriotic Musings on the 4th of July”

Maui, Day 4. Last year, we spent the third week of January in Hawaii. With all the time hops showing up in Google photos, it seemed like a good time to post some more photos.
Celebrated our 10th Annual Girls' Get Together this past weekend. (@wayfaringlass was present but missed the picture by a few minutes.)
And there were in the same country shepherds abiding in the field, keeping watch over their flock by night. And, lo, the angel of the Lord came upon them, and the glory of the Lord shone round about them: and they were sore afraid. And the angel said unto them, Fear not: for, behold, I bring you good tidings of great joy, which shall be to all people. For unto you is born this day in the city of David a Saviour, which is Christ the Lord. (Luke 2:8-11)
Thani joined Auntie Leah and 고모 (Gomo) Hannah for an after-church stop at @crossroadscoffeect. Safe to say he was a fan.
Annual trip down memory lane. ❤️