What happens when a happy Muslim upbringing meets western culture and Christian friendship? Seeking Allah, Finding Jesus is the story of an American born Muslim who loves his family and faith but, through seeking to defend his religion to others, dares to question. 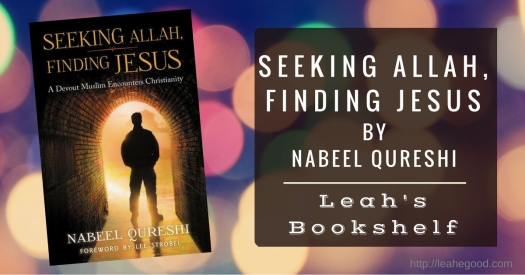 Glorified is my Lord . . . Who is my Lord? Who are You, Lord? Are You Allah, the God of my father and forefathers? Are You the God I have always worshiped? The God my family has always worshiped? Surely You are the one who sent Muhammad as the final messenger for mankind and the Quran as our guide? You are Allah, the God of Islam, aren’t You? Or are You . . .” I hesitated, fighting the blasphemy I was about to propose. But what if the blasphemy was the truth? “Or are You Jesus?”

Born in the United States to Pakistani immigrants, Nabeel Qureshi grew up in a loving family, his religion one of the most consistent and beloved elements of his formative years. As a child and youth, he enthusiastically learned the facts and doctrines of his religion, eager to be an ambassador for Islam among his peers. Not until college did he meet a Christian who was willing to be his friend. As two young men passionate about their faiths, Nabeel and David often discussed religion. Through those discussions, Nabeel found his perception of Christianity and its flaws to be inaccurate. And in his efforts to disprove Christianity and confirm Islam, he also uncovers inaccuracies in his perception of Islam. 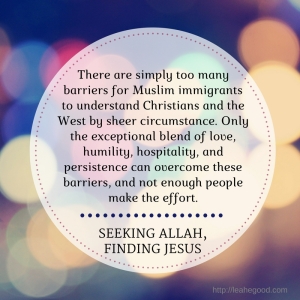 When a friend recommended this book to me, I anticipated a story about conversion to Christianity and ensuing persecution. Because it was recommended by someone I trust, I never read the synopsis to correct my expectation before reading. It turns out that Nabeel’s conversion concludes rather than kick starts the book. Instead of focusing on the challenges faced by those who convert from Islam to Christianity, Seeking Allah, Finding Jesus offers a sympathetic, inside look at everyday Islam and shares the author’s painstaking journey to Christ.

A missionary who sometimes visits my church likes to say, “Muslims are not the enemy. Our battle is not with flesh and blood.” This book humanizes that flesh and blood. It gives an honest perspective on what many Muslims believe as well as the cracks in the foundation that many are not aware of. It shows how genuine, persistent friendship can have eternal rewards. And it gives a raw glimpse of the many barriers between Muslims and Christianity.

I really appreciated the honesty, compassion, and sincerity of this book. The author neither sensationalized nor trivialized, a seemingly rare middle ground when it comes to discussing faith in general and Islam in particular. If you fear Muslims, struggle to understand why some claim Islam as a religion of peace when evidence to the contrary saturates the news, or want to know how to genuinely connect with the Muslims you meet, this would be a great book to pick up.

What is one of your favorite biographies that features a conversion testimony or missionary? Do you have any recommendations for Christians who want to learn more about Islam and how to reach out to that community?

Happy one week birthday to my newest niece, Krystiana Ruth. ❤️
I was a little bit nervous heading to @realmmakers this weekend. I haven't been writing seriously for 6 years, haven't been to a writing conference in 9 years, and didn't know anyone besides a few online acquaintances. There was no need for worry though! What a wonderful and encouraging weekend!
What things make summer feel cozy to you?
To quote Melody, "I didn't know I needed this picture in my life until I saw it."
"For you, Auntie."
Maui, Day 3. 'Ohe'o Gulch & Wai'anapana Black Sand Beach..