Do you borrow and buy more books than you can possibly read? Me to! For that reason, I rarely pre-order books. Why bother when there are five (or thirty!) books on my shelf that haven’t been read yet? I made an exception for Deliver and Exiles. After months of anticipating the final Blades of Acktar book, I wanted Deliver on my kindle as soon as possible! 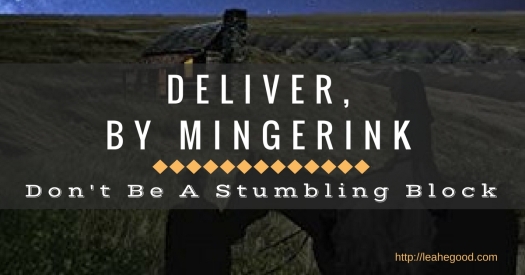 Martyn values loyalty above all else. As one of King Respen’s Blades, Martyn’s duties were straightforward and his loyalties clearly defined. Now nothing is clear. His best friend has turned his back on the life he once shared with Martyn. His defection caused Martyn to both take punishment and deal it out. With a new king on the throne, Martyn’s life has been spared but his purpose destroyed. He doesn’t belong.

I found the author’s approach to showing Martyn’s cautious dance with faith intriguing. Acktar is a broken country. The people are bitter, wary, and unforgiving. A desire for revenge runs deep, even among those who claim to be Christians. And the characters readers have come to love are plunged into the uneasy churnings of a disheveled nation.

Throughout Deliver, we slowly learn why Martyn values loyalty so much. Abandoned as a boy, trust doesn’t come easily for Martyn. His willingness to trust God is especially shattered. He knows of God. In fact, a long time ago, he believed in God. But that was before his Christian parents abandoned him in a church without a goodbye and the minister of the church refused to shelter him. A long education in the school of hard knocks has taught him that trust is usually misplaced.

Can God be trusted even when His representatives fail?

Isn’t it strange that God allows us to be his representatives? We’re so flawed. So often we refuse to surrender our human impulses to His purifying control and instead blunder off on our own. Yet He still chooses to love us and use us.

Martyn experiences both sides of Christians. His heart is softened by the care of some Christians, but he also has to learn to see the trustworthiness of God despite the hypocrisy of others.

It’s sobering to realize the weight of what we’re entrusted with. This book reminded me of how important it is to not lose sight of our role as ambassadors. Our purpose here on earth is eternal. The hurt feelings we cling to, the payback we want, and the bitterness we harbor won’t satisfy anyone. If we claim Christ without following his example of how to live, we place stumbling blocks in the paths of those around us and we hinder our own purpose.

I don’t know about you, but I’d rather be one of the Christians drawing skeptics to Christ instead of one of the ones getting in the way.

It’s not easy. My first inclination when people slight me is to set them straight. My desire for mercy is often limited to those who it’s easy to feel sympathy for.

Maybe we’re not in the same position as the citizens of Acktar. We’re not regularly faced with needing to forgive an assassin responsible for killing our loved ones. We don’t have soldiers who destroyed our homes integrating into our communities. But each of us knows someone who is a little bit harder to love. Someone we want to keep at arm’s length. Can we come up with ways to make these people thirsty for Christ instead of distracted by our faults?

What are some of your favorite verses for dealing with difficult people? How do you keep your focus on God when the faults of people threaten to distract you?

5 Replies to “Deliver: Don’t be a Stumbling Block”