Have you ever felt alone? Unwanted? Like the effort you put into life barely keeps your head above water and true fulfillment is an unreachable ideal? 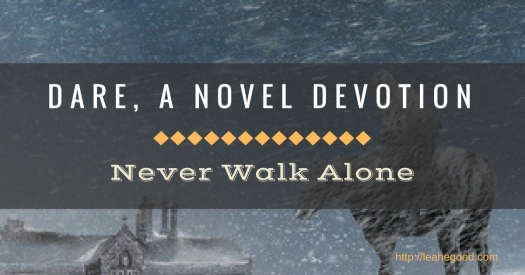 Leith rubbed his left shoulder. In his five years as a Blade, he’d never suffered the humiliation of a mark of failure. —Dare, pg 2

Leith belongs to an elite force of assassins and reports to a cruel and corrupt king. He knows nothing else. He believes himself to be content with his life. He knows what is expected of him, knows he is good at his job, and finds satisfaction in his successes.

Few people in the United States of American can claim Leith’s job description, but many walk through life with a false sense of satisfaction. Good jobs. Plenty of money. The approval of people who care more about the bottom line than the individual doing the work. Though they might never walk alone physically, the lives they lead can be deeply lonely.

He’d failed. He never failed. He’d worked so hard to earn his place, yet he’d been brought down by Chimb’s foolishness and a single, peasant’s arrow. He was going to die. Alone. Unwanted.

When Leith is seriously wounded by a father protecting his family, the emptiness of the life he’s built for himself becomes instantly and glaringly obvious. The brave assassin who has secured a kingdom for his master is suddenly consumed by the fear of dying alone and unwanted.

There are two masters in this world. God and Satan. No man can serve both (Matthew 6:24). Satan behaves much like Leith’s liege. His demands come at high cost to those who serve him. His condescending approval requires one’s soul. And when trouble strikes, he leaves his slaves alone and without comfort.

When Leith sees a light in a window he rides to the door, hoping against hope to find a warm place to die without being utterly alone. Inside are two girls who serve a master far different from Leith’s.

God rules his people with compassion. He demands nothing less of perfect, yet sent His Son to pay the price for people’s rebellion before those He rules had even submitted to Him. He approves of nothing more than His Son, and the Son shares His acceptance into the throne room with the basest of servants. When trouble strikes, God stands by His servant’s so that they will never walk alone through any trial.

“Choose you this day whom ye will serve,” Joshua challenged his countrymen. “whether the gods which your fathers served that were on the other side of the flood, or the gods of the Amorites, in whose land ye dwell: but as for me and my house, we will serve the LORD.” (Joshua 24:15)

Each person has to choose who to serve. Many, like Leith, fall into the snare of the evil master. But everyone has the opportunity to change their loyalty to the One who will love them, have compassion on them, and stand by their side forever.

If you feel lonely and unwanted and like you can barely escape punishment never mind win approval, take courage. If your allegiance is pledged to God, you are never alone or unwanted, and Jesus Christ has already taken away your punishment and bridged the divide between you and God himself.

When Joshua declared his choice to serve God, He knew that God would not leave him high and dry. When his mentor Moses had died, the Lord had spoken to Joshua to tell him to take leadership of the nation. At that time, the Lord told Joshua, “Have not I commanded thee? Be strong and of a good courage; be not afraid, neither be thou dismayed: for the LORD thy God is with thee whithersoever thou goest.”

The God who rules today is the same God Joshua served. And like Joshua, you can have complete confidence and peace in the knowledge that you will never walk alone.

During the holidays, I received an advanced reader copy of Tricia Mingerink’s fourth Blades of Acktar novel (YAY). Stay tuned for more devotionals inspired by this series!

8 Replies to “Never Walk Alone: A Novel Devotion from Dare”

Lake Ontario, Day 1. After more than ten years, I finally made it to Safe Haven Museum in Oswego, NY. While researching for a post WWII novel in high school, I learned that the United States accepted only one group of refugees during the war. Those refugees were housed at Camp Ontario in Oswego, NY for the duration of the war. The museum was small but worth the trip!
✨Mexico, Parish, Central Station, and Selkirk Shores.✨
✨A day in Oswego, NY.✨
Happy one week birthday to my newest niece, Krystiana Ruth. ❤️
I was a little bit nervous heading to @realmmakers this weekend. I haven't been writing seriously for 6 years, haven't been to a writing conference in 9 years, and didn't know anyone besides a few online acquaintances. There was no need for worry though! What a wonderful and encouraging weekend!
What things make summer feel cozy to you?