After my November post about Fiction & The Sanctity of Life, we all agreed that we like stories that embrace a message of hope and faith. Today I want to share a few pro-life stories that I’ve enjoyed. These books didn’t necessarily set out to promote a pro-life message, but they show what it looks like to value life and fight for hope. 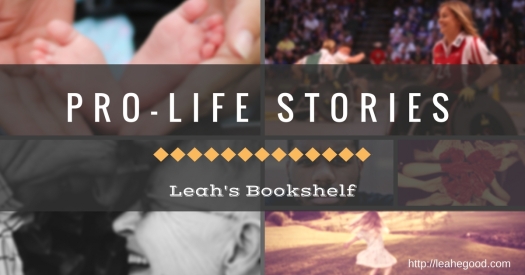 The Way of Kings,
by Brandon Sanderson

As I mentioned in my review of The Way of Kings, the value of life was a key theme in the story. When the main character hits the lowest point of despair and considers throwing himself into a chasm to end his miserable life, his spren–a representation of courage–begs him to try again. Motivated by the spren’s care for him and his care for the men around him, he agrees to give life one more try.

The men mattered. Perhaps Kaladin would die in the next bridge run, or perhaps he would break under the strain, and give Amaram one final victory. But as he settled down on the ground to plan, he felt that tiny warmth burning steadily within him. It was the warmth of decisions made and purpose seized.

Main character Ashley and her husband are excited to discover Ashley is pregnant with their third child. They receive the news that they are expecting their first daughter with joy. But then tragedy strikes. The doctor tells them their unborn daughter has anencephaly and will, at best, live only hours after birth. Clinging to faith and hoping for a miracle, the couple and their family press forward with a determination to love and cherish their child for whatever length of time she is with them.

Before this pregnancy, Ashley would sometimes get the slightest bit frustrated with Cole’s interruptions. But now her patience seemed limitless, and Landon wondered if that was because of little Sarah. Every day felt more precious because of her.

Would you save the life of a man who had a hand in the murder of your parents? That question confronts Renna when one of the king’s assassins shows up on her doorstep in the middle of a blizzard. He’s severely wounded. All she has to do to ensure he pays for his crimes against her family is refuse to treat him. Somehow her faith gives her the strength to tend to the wounds of her enemy.

Life belonged to the Lord. She’d placed his life in the Lord’s hands when she’d decided to help him the night before. It was God’s decision whether the Blade lived or died now, not hers.

Ask Him Why
by Catherine Ryan Hyde

A young man’s siblings are confused when their big brother is court martialed for refusing to go out on duty. As the media surround them, spouting opinions and judgement, the two children helplessly watch their world crumble around them. The sister finds an anchor when she seeks out an elderly man who befriended her now imprisoned brother. The old man lives in a cottage at the edge of a cliff and quietly befriends people who enter his property intending to end their own lives. He tells the girl that people need to be seen, need to know that someone cares about them, and so he offers the strangers he encounters the gift of breakfast and a listening ear. For the girl and her family, the man’s simple generosity is the difference between reconciliation and a continued cycle of dysfunction.

I never thought I could save the whole world. I can save what I can save and that’s that.

Read my review of Ask Him Why.

Have you enjoyed stories with a pro-life message? Share the titles and your thoughts!