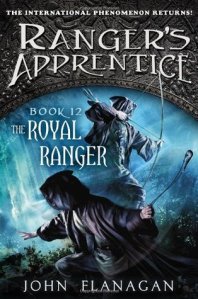 “I’ve been telling you, Maddie. You are no longer a princess. And you can no longer behave as if you are. You are my apprentice. You are no better than anyone else here in Redmont–Not Jenny, not the stable boy at the castle, not the youngest of the Battleschool apprentices.

“On the other hand, you are no worse than any of those people either. You’re an equal among equals.”

Story Synopsis
Will Treaty, now a grown man in possession of just as much fame as Halt, is consumed with a need for revenge. With the person closest to his heart dead because of the actions of an outlaw band, he is determined to hunt down every responsible person and kill them. He doesn’t care what he has to sacrifice to reach this objective. His worried friend and the current ranger commander, Gilan, is on the brink of being forced to expel Will from the ranger corps.

Gilan isn’t the only one with someone to worry about either. Horace and Cassandra (aka Evenlyn) are frustrated and worried about their daughter, Madelyn. Headstrong, spoiled, and a little too full of herself, Maddie seems determined to defy her parents wishes. It’s only a matter of time before she gets herself into significant trouble. Something must be done.

And so it’s decided. It’s time for Will to take an apprentice and for the ranger corps to accept it’s very first female apprentice. Only time will tell the wisdom and effectiveness of the decision.

My Thoughts
From the first rumors about a female ranger’s apprentice, I was apprehensive about this book. The last thing I wanted to see was the well loved characters in this well loved series used to promote a feminist agenda. Or even just to tell a story with feminist overtones. I was pleasantly surprised. The overall concept could be considered feminist, but even if a message of this type was intended, it didn’t take precedence over good story telling. Yay!

The whole story was great. Maddie’s journey from spoiled princess to thoughtful, self-sacrificing ranger was delightful. It reminded me a little of Hugh’s similar journey in Sir Malcolm and the Missing Prince

. The rest of the story was typical John Flanagan adventure and humor. Fans of the series won’t be disappointed!

Any other Ranger’s Apprentice fans out there?

Driving home from Cape Cod seemed like a good excuse to visit a new ice cream shop.#ctmomandpopicecreamshophop
It's been four years since we've seen each other. What a happy reason to get an updated selfie. Congratulations, @amandabeguerie.
Every year I say it was the best yet, but I've got to say it again. The #tbcyouthdrama of The Child Stealer (Amy Carmichael) was fantastic. If you're in the area and can get a ticket for tomorrow...do it!
It's been 7 years since starting a career and figuring out adulthood put my writing endeavors on hold for a while, but I still know my way right to the non-fiction writing aisle in the @walpublib stacks. 😍
Me: Nathaniel, say cheese.
A day spent exploring the @ctrivermuseum with Mom. ☺️