Deadliest maritime disaster in recorded history. Any guesses? The first to come to most minds would probably be the Titanic. My second guess would be the Lusitania, an ocean liner sunk during WWI. Neither maritime disasters were the deadliest in recorded history. When a German u-boat torpedoed the Lusitania, 1,198 passengers perished. After the “unsinkable” Titanic struck an iceberg, approximately 1,500 passengers died. The well-known and often spoken of Titanic disaster is dwarfed by an unheard of tragedy during WWII–the sinking of the Wilhelm Gustlov.

Published in February of 2016, the novel Salt to the Sea is dedicated to telling the story of the Wilhelm Gustlov, a German ocean liner that took approximately 9,000 lives with it when it was sunk during WWII. 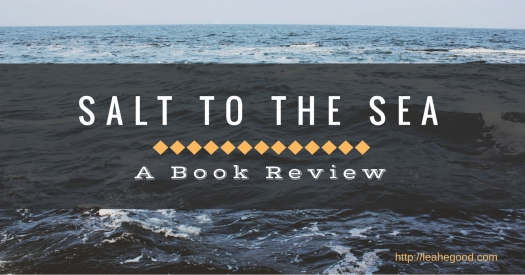 Joanna. Compassionate and medically skilled but haunted by guilt as she flees the invading Soviet soldiers.

Florian. Determined and mysterious, needing to forge ahead on his own mission but unable to fully turn his back on someone in need.

Emilia. A vulnerable foreigner desperate for a protector.

Alfred. Unfit for the war he imagines himself a hero of.

Four interwoven live with varying levels of innocence, secrets, and nagging pasts. Four lives driven together by war and destined to share in a disaster caused by the very conflict they want so badly to escape.

Salt to the Sea is everything historical fiction should be. There is gravity and depth of emotion without dramatizing or glorifying history. It sheds light on aspects of history that hover on the brink of being lost to memory. It shows people just like us who struggle, endure, show courage, make mistakes, love and care and fear.

This is a book that deals with hard subjects. Invading armies taking advantage of the women and children left defenseless by war. Babies and children that cannot be saved.

While I didn’t fully connect to the writing style and only recommend the book with the above warning, I think this is one of the most powerful historical fictions I’ve encountered. I’m still surprised by the lack of knowledge about this historic event. It makes you wonder what other significant events experienced by the losing sides of conflicts have been lost to history. It punches through the typical WWII focus of the horrors of the holocaust to remind readers that those targeted by Hitler weren’t the only innocents damaged by the war. This is definitely a book that leaves you with thoughts to chew on.

What historic events do you think people should be more aware of?

(P.S. For readers who despise sad endings, this book does a great job of balancing the reality of the disaster with the story of those who survived.)

9 Replies to “Book Review: Salt to the Sea”