Another fine indie novel hit the shelves this week. We’re celbrating the release of Morgan Huneke’s latest book, Crannig Castle, by learning about one of the characters. This post is one of many in this week’s blog tour, so be sure to check out some of the other posts. Also be sure to scroll to the bottom of this post to find a link to enter a giveaway. 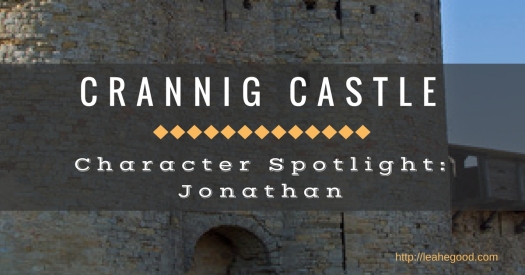 History: Jonathan grew up in the 50s, the product of a rather Leave it To Beaver childhood. He had a bit of an obsession with fantasy novels, particularly with Narnia. His love of fantasy helped prepare him for his own adventure, but not quite enough. He wasn’t expecting to be frozen at age twelve, and he wasn’t expecting to spend forty years locked in a dungeon with his ancestors. Once the rest of the Time Captives arrived, they were able to escape and go on a quest to free the rightful king. Jonathan got to experience sea voyages, pirate attacks, and sword fights, allowing him to feel on par with the Pevensies. Now he and his family are gearing up for the final war in their grand fantasy adventure.

Author’s Notes: Jonathan started out as a sort of combination of Wally and Beaver Cleaver—I was cheating and figured that was the easiest way to make him period accurate. But when it occurred to me that he was growing up during the releases of Narnia and Lord of the Rings, I just couldn’t resist pouring all my love of those books into him. Jonathan was one of the more fun characters in Time Captives to write. Everything he sees is colored by fantasy novels, so references abound. Though as much as he likes to compare his experiences to Narnia, his adventure is rather different. And it was fun to explore.

This post is part of the Crannig Castle blog tour.  If you’d like, you can check out the other posts in the tour.

God, please look after Adriel. Keep him safe and keep him from acting foolish. And please help him to be able to find me.

Rae knew she could trust God to look after both of them. It was all she had now.

The Time Captives have been reunited. The rightful king has been freed. Now all that remains is to defeat the strytes who still hold a tyrannical rule over the people of Calhortz. But with their lack of soldiers, it’s a task that is easier said than done. They need allies, but are they worth it when it requires facing ghosts from their pasts?

Returning to his home country only brings the loss of Adriel’s family to the forefront of his mind. His determination to find Rae has never ceased, but now that determination could potentially destroy all that he and the Time Captives have been working towards. And his new-found faith may not be able to withstand the challenge.

Will they be able to set aside their personal struggles for the sake of the freedom of all or will they allow their pasts to consume them? Will they manage to win back Crannig Castle from the rule of the strytes? The fate of Calhortz hangs in the balance.

Crannig Castle is the final book of the Time Captives trilogy, a tale of faith, family, fantasy, and a fight for truth and freedom.

Driving home from Cape Cod seemed like a good excuse to visit a new ice cream shop.#ctmomandpopicecreamshophop
It's been four years since we've seen each other. What a happy reason to get an updated selfie. Congratulations, @amandabeguerie.
Every year I say it was the best yet, but I've got to say it again. The #tbcyouthdrama of The Child Stealer (Amy Carmichael) was fantastic. If you're in the area and can get a ticket for tomorrow...do it!
It's been 7 years since starting a career and figuring out adulthood put my writing endeavors on hold for a while, but I still know my way right to the non-fiction writing aisle in the @walpublib stacks. 😍
Me: Nathaniel, say cheese.
A day spent exploring the @ctrivermuseum with Mom. ☺️