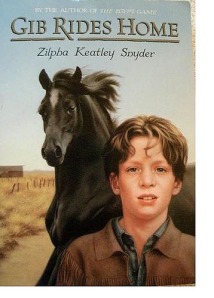 No one had heard from Gibson Wittaker since he went away, but the rumor was that he had been adopted by a family who lived near Longford, a small cattle town in the next county. There was nothing especially uncommon about that. Half, or even full, orphans left Lovell House fairly often, going back with a remaining parent or out to an adoption, but what was so shocking was his reappearance. How could Gib Wittaker be strolling into the senior boys’ dormitory when the law said, at least the law according to Miss Offenbacher, that Lovell House adoptions were not reversible?

The fact is Gib Wittaker was not adopted–more like farmed out–and he didn’t really want to return to Lovell House. More than a year earlier a gray-bearded man had come and taken Gib from the orphanage he’s lived in for the past five years. As he works at his new home, Gib finds a sense of accomplishment from working hard and discovers a talent for handling horses. But the Rocking M Ranch is also full of mysteries, some of them related to Gib. He hopes to find out more about his past, but some secrets are better off left alone.

Maui, Day 4. Last year, we spent the third week of January in Hawaii. With all the time hops showing up in Google photos, it seemed like a good time to post some more photos.
Celebrated our 10th Annual Girls' Get Together this past weekend. (@wayfaringlass was present but missed the picture by a few minutes.)
And there were in the same country shepherds abiding in the field, keeping watch over their flock by night. And, lo, the angel of the Lord came upon them, and the glory of the Lord shone round about them: and they were sore afraid. And the angel said unto them, Fear not: for, behold, I bring you good tidings of great joy, which shall be to all people. For unto you is born this day in the city of David a Saviour, which is Christ the Lord. (Luke 2:8-11)
Thani joined Auntie Leah and 고모 (Gomo) Hannah for an after-church stop at @crossroadscoffeect. Safe to say he was a fan.
Annual trip down memory lane. ❤️